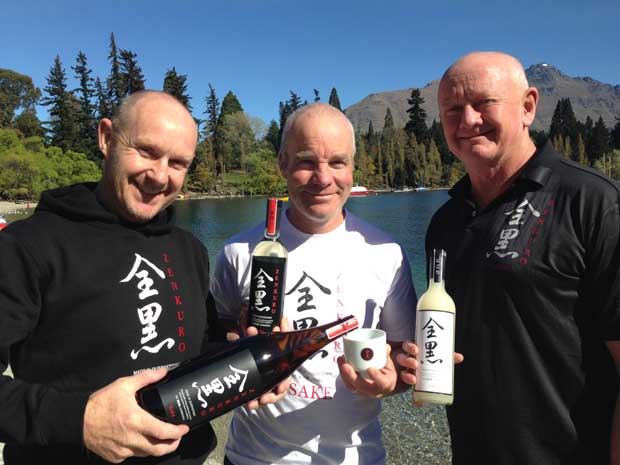 New Zealand-made Zenkuro sake is ranked among the world’s best.

Sake is the hottest drink in town. Well, the bigger towns such as London, New York, Tokyo and Paris perhaps rather more than our big towns such as Tokoroa, Washdyke and Masterton, where beer and wine might still rule the roost.

And guess whose sake is considered gold and silver medal quality? Ours! New Zealand’s Zenkuro sake, from three Queenstown-based Japanophiles Craig McLachlan, Richard Ryall and Dave Joll, won a gold and a silver medal at the recent world sake challenge in London.
Skillfully created by master sake brewer Dave and willfully named after our national colour (zenkuro translates to completely black), each of the two varieties Zenkuro entered won medals. The 34 judges, who were all certified sake sommeliers, awarded only two gold medals to sake made outside Japan – and Zenkuro’s Shizuku Shibori Drip-Pressed was one. Their Nigori White Cloud won silver.

The competition is organised by the international Sake Sommelier Association and held in Harrods’ Tasting Room. The goal is to recognise and reward the most outstanding premium sakes in the market. The enormous growth in popularity of sake drinking is not just in Japanese restaurants but also in gastro-pubs and wine bars where patrons are wanting to enjoy the premium end of the rice wine product range.
Sake maker Dave (Joll) is both ecstatic and relieved at the results.

“We weren’t expecting to win anything. The aim of entering was to gauge how we were doing after our first year, and hopefully receive some advice and encouragement from the judges. I was actually a bit reluctant to put our sake out there amongst so many well-known and respected sake labels, with only a year and a half of brewing experience behind us.”

Sake can be drunk on its own, always cold, and it is also a good accompaniment to food especially foods which grape-based wines do not easily match including asparagus, tomatoes and fish. Dave says it is also good with roast pork, barbecued prawns and cheese and bread. For those with fancier wallets, it is also reputed to go very well with caviar and foie gras.

A great dish to pair with Zenkuro sake

Mix all ingredients except for the salmon or tuna steaks. Coat steaks in spice mix.
Sear fish steaks for 3-4 minutes on each side , or until done.
Serve hot with any kind of fresh greens and a glass of chilled sake.

Read more about the trio behind Zenkuro here: