Recipe: Almond Cheesecake in a Jar 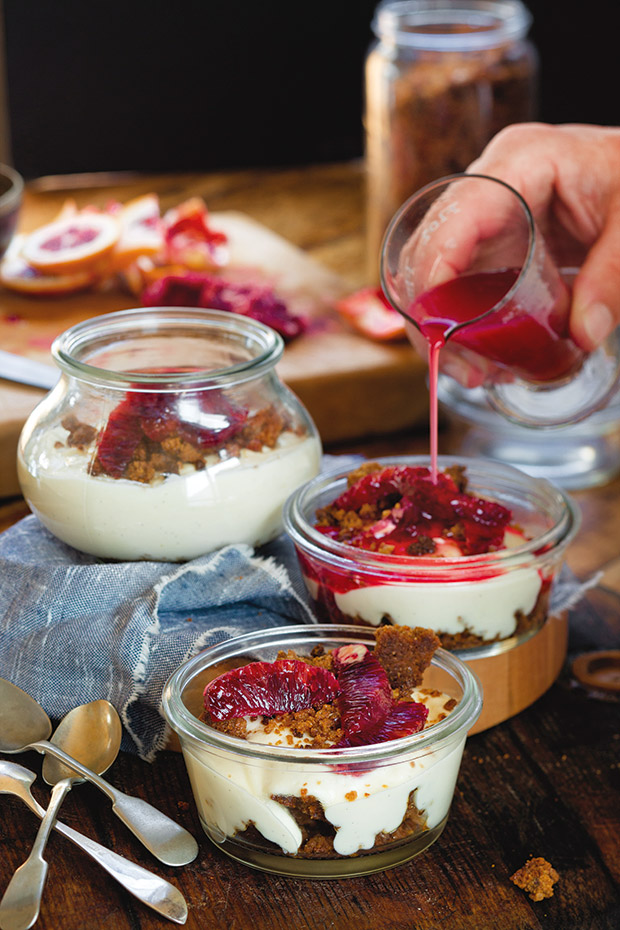 Once you try these delicious almond cheesecakes, there’s no going back.

Cheesecakes have always been a big part of my life. Firstly, I don’t think there’s a better slice of cake than a cheesecake.

Secondly, my pop is obsessed with them, marking every birthday and celebration with a slice of cheesecake. Originally, he’d only eat the Crofters ones, but he’s now given my wife Bee his tick of approval for hers. We haven’t tried this recipe on him yet, but I’m sure it’ll go down a treat.

We use blood oranges for their dramatic colour, but ordinary oranges (and a touch of red cordial if you want the colour) would do the trick.

In a food processor, blitz the butter, flour and sugar until crumbly. Add the dates and blitz again until just combined.

Spread the mix out in a large baking dish. Toast in the oven for 10 minutes, then stir and cook for another 10 minutes. Remove from the oven and transfer to a flat baking tray to cool.

Pour the almond milk into a saucepan over a medium heat. Sprinkle over the gelatine and slowly bring to the boil, then remove from the heat.

In a food processor, blitz the cream cheese. While still blending, add the lemon juice, then slowly add the warm almond milk. Place a layer of the crumble in the base of four large glasses or jars – reserve some of it so you have a little left for the top of each. Pour in the cheesecake filling and refrigerate until set.

Peel one of the blood oranges with a sharp knife, removing all the pith with the skin. Cut the flesh into segments to use as a garnish. To make the syrup, juice the other orange and put into a small saucepan with the lime juice, lime zest, and honey. Bring to the boil, then remove from heat and strain.

To serve, top the cheesecakes with extra crumble, blood orange segments, and syrup.