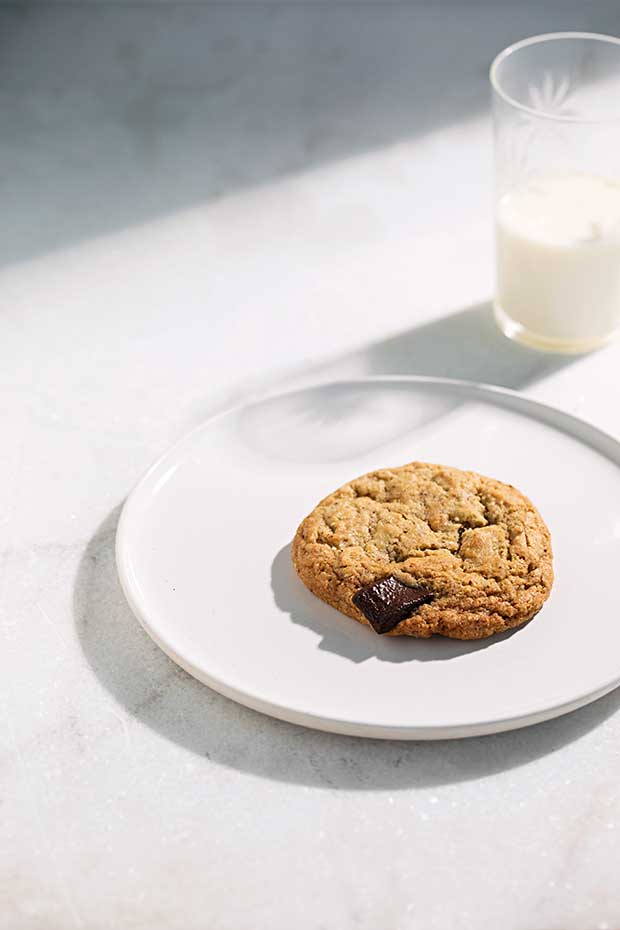 As you may have guessed, this recipe is named after my one-and-only light-of-my-life daughter Charlotte. These cookies were one of the first recipes developed for the newly established Magnolia Kitchen back in 2011.

They were created in our home kitchen alongside aforementioned light-of-my life daughter Charlotte, who was skulking about on bowllicking duty. I told Charlotte I would name the recipe after her because one day it would be in my book that I was writing recipes for—which of course was something I used to say to anyone who would ask for recipes.

Back then I don’t know that I ever thought I’d actually publish a book but I sure as hell wanted one. Now look at me, Charlotte—I bloody did it, and here’s your namesake recipe in the book. xx

In a blender, blend your oats until fine. Add the almond meal, flour, baking soda, baking powder and salt, and pulse to combine.

In a bowl, cream together the butter and sugar until light and fluffy. Add the egg and vanilla and beat to combine. You can do the creaming and beating by hand if you are so inclined, or you can use a hand-held mixer or (ideally) a stand mixer fitted with the paddle attachment.

Add the dry ingredients from your blender, plus the chocolate chunks, and fold together until just combined.

Portion the dough onto a tray lined with baking paper; the portions can be spaced close together as this is just the chilling stage. We use a cookie
scoop for this, but it’s not a necessary tool so if you don’t own one then just wing it with a tablespoon.

Chill for at least an hour in the fridge (or less in the freezer), until the dough is firm and holds its shape. At this stage you can put the raw cookies into a container and store them in the freezer for a rainy day or (let’s be honest) a hungus night.

If you are Rose, then you just eat the dough raw (thanks for testing the recipe, my prettiest friend).

Whenever you decide to bake them, preheat your oven to 160°C (315°F). Line a baking tray with baking paper and put your chilled cookies onto
the tray, leaving generous space between them as they will spread.

When I say generous space I bloody mean it, team—there is nothing worse than cookies that kiss or, worse, morph into one giant cookie during baking.

Bake for 12–15 mins or until golden but slightly underdone in the middle.

The cookies are perfect when they are slightly crispy around the outside and chewy in the centre, so make sure you adhere to the ‘underdone in
the middle’ bit.

Allow to cool on the tray before inhaling (I do realise that this step will be ignored by everyone).