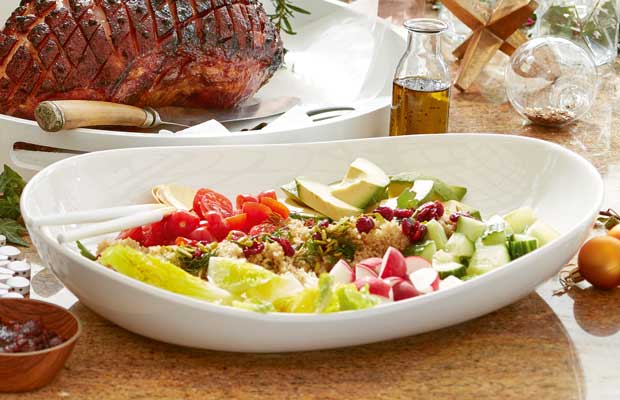 Make the quinoa first. Heat the olive oil in a medium pot. Add the onion and cook for 2 to 3 minutes, until soft and translucent.

Add garlic and cook for another 30 to 40 seconds, until soft. Stir in the quinoa, 550ml water and ¾ teaspoon of salt. Bring to a boil, then cover and reduce the heat. Simmer for 10 to 12 minutes until the water is absorbed and quinoa is tender.

Remove from the heat and cool completely. Add cinnamon, dill, parsley, lemon zest and juice, and the second measures of extra virgin olive oil and salt. Fluff up the quinoa with a large fork.

Pile the quinoa in centre of a presentation platter and arrange the vegetables around it. Mix the lemon juice and cranberries, then microwave for 20 seconds. Scatter them and the juice over the quinoa, along with the pistachios.

More stories you might like:
Why colostrum shouldn't go to waste (and how you can benefit from it)

Serve the vinaigrette alongside.