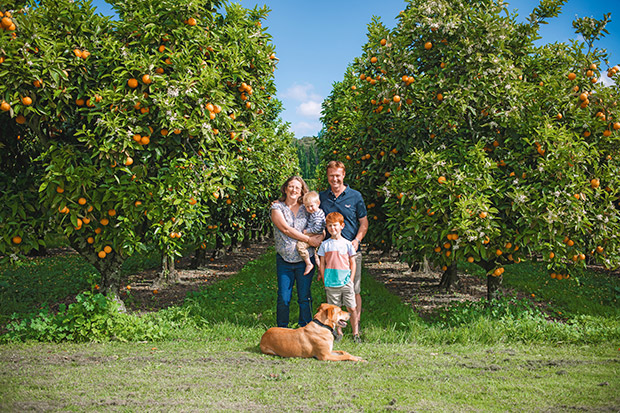 Squeezy does it for this family-owned Gisborne orchard, who took home the 2022 Drink Champion award for their orange juice.

Cath Carter reckons the vibrant valencia orange juice she and her husband Matt produce is the authentic taste of Gisborne in summer. The former vineyard manager says she thinks of Hill Road Orange Juice like wine, deserving respect for its multi-layered flavour and seasonal variations.

Judges agreed, naming Hill Road Orchard this year’s Drink Champion and awarding it a gold medal. The unpasteurized, pulp-free juice, which judges described as “fantastic egg yolk orange”, is squeezed from valencia or navel oranges grown within a stone’s throw of the juice “factory”.

The Carters launched their Hill Road Fresh Orange Juice in 2011, a year after they purchased a seven-hectare orchard in Ormond. Making juice was a side-hustle while they pursued day jobs (Cath was in the wine industry, Matt in horticulture). The juice is a hyper-local, hyper-fresh product in more ways than one. Once picked, Hill Road’s oranges travel no more than 300 metres to the juice room, where they’re cleaned, chilled and juiced. The lack of additives means the juice has a short shelf-life, and as such, it’s only available in the Gisborne region.

The winners of the sixth Outstanding NZ Food Producer Awards make some of the most delicious food and drink Aotearoa has ever tasted. Salute the medallists and winners and show your support by buying their gourmet treats.

Find the full list of winners here, and medallists here.