We try riding an electric bike through Auckland


We try: riding an e-bike in Auckland from This NZ Life on Vimeo.

Electric bikes are popular in Asia and Europe, but will they catch on in Auckland? We see what the buzz is about.

Electric bikes or e-bikes are all the rage in Europe, and the trend is catching on in New Zealand. Statistics New Zealand show e-bikes imports rising from 1532 in 2013 to 13,364 last year as commuters take to bikes that don’t require pedal power – even uphill. Battery powered e-bikes remain charged for approximately four hours and can reach speeds of 35km per hour. However, not all e-bikes are created equal. Some have a throttle on the handlebar to give the lift of speed while on others speed is controlled with the pedals. Either way, it’s a faster and less tiring mode of transport than a standard bike. “The advantage is you can choose how much effort you want to put in and it is a more accessible mode of transport for most people,” says Maurice Wells of Auckland bike retail store, The Electric Bike Hub.
The rise in popularity is directly linked to new biking infrastructure such as Auckland’s Lightpath/ Te Ara i Whiti aka the ‘pink path’ and the North Western Cycleway in Te Atatu.
“With safe infrastructure you see people from the surrounding suburbs jump on electric bikes. When you look at places that don’t have the same investment in infrastructure you just don’t see as many people interested in riding.”
The Electric Bike Hub supplies and services fleets to large corporate firms including Datacom and government organisations NZTA and the Auckland City Council. Auckland’s mayor Phil Goff has been spotted zipping around the city on an e-bike. “The mayor’s office has two bikes and Phil does use them from time to time. A bit more than his predecessor, I’m told,” says Maurice.

thisNZlife asked two riders, of varying abilities, to try an electric bike during the traffic mayhem known as ‘March Madness.’ 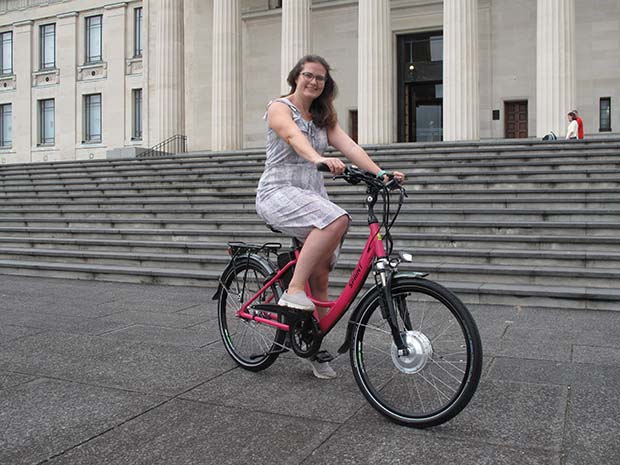 ‘It’s as easy as riding a bike,’ they said, but in fact, it’s easier than riding a bike. My first encounter with an e-bike was a little wobbly, but then again so are my encounters with normal bikes. I’ve never been a gung-ho biker and Auckland’s volcanic dips don’t make a great biking nursery. As a child, we lived on a steep street in east Auckland, which meant a slow painful pedal the top and a terrifyingly fast ride to the bottom (and a few near misses with oncoming traffic). Not one, but two, of my intermediate and high school friends, were knocked off bikes by cars on the three-lane Pakuranga Highway. As a result, I am genuinely scared of traffic most of the time.

When I trial the eZee Sprint 7L electric bike, I’m in a state of abject terror even though I’m riding around the quiet roads of the Auckland Domain. The bike is 25 kilos, a lot heavier than a normal bike, but the weight is only really noticeable when stationary. A twist of the handlebar throttle makes the 300W motor kick-in and the bike zooms forward. It takes practice to be able to control the sudden surge in power, but after a few practice laps of a flower bed (in front of a bus load of amused tourists) I’m no longer bunny hopping. The eZee Sprint 7L’s top speed is 35 kph and riding uphill is a breeze, literally. Instead of pedalling up a sweat on the ascent I can feel the wind in my hair. 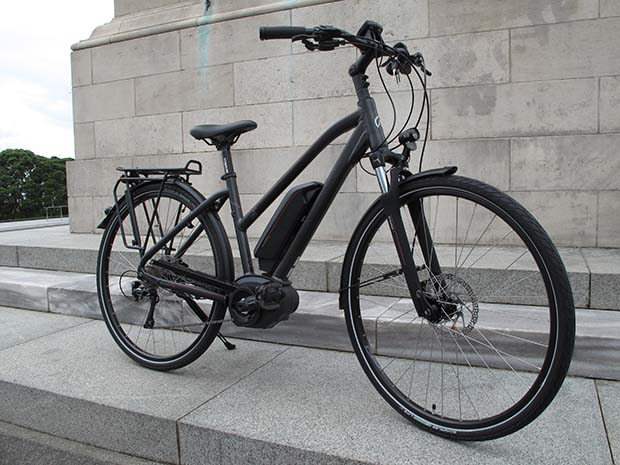 I also test the black Kalkhoff Pro Connect model. The 250W motor isn’t powered by handlebar throttle but the speed is controlled by pedalling. The harder the rider pedals, the faster it goes. This model reaches top speeds of 25kph and is close in appearance to a normal bike and thus favoured by those who like to ride e-bikes incognito. In comparison, the eZee Sprint 7L model is bigger and chunkier with an audible buzz. The noise can be an advantage as pedestrians may not expect a cyclist to advance so rapidly.
So am I an e-bike convert? Well, maybe. These days I live in Onehunga, and my commute to Newmarket would require negotiating several major roads without biking lanes. With a bit more practice (and if I can convince my carpool partner to join me) then I’d be keen to zip the streets again.

(See below to unravel the mystery of the “Quax”.) 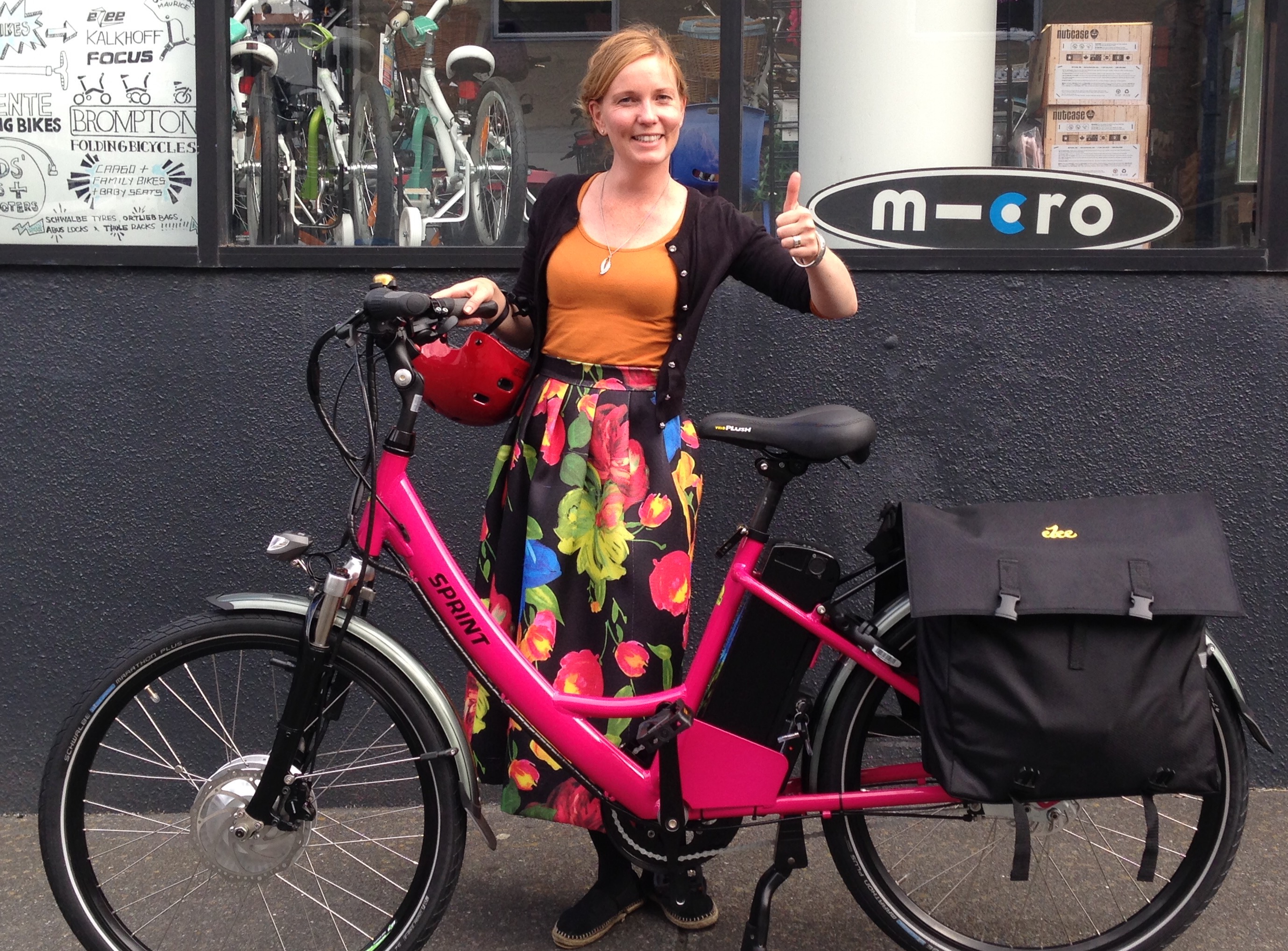 Over the past few years, I’ve been using my car less and less as I find it more convenient, cheaper and fun to use a bike. I’m an advocate for biking in Auckland and a member of all-female bike group Frocks on Bikes and believe there are many health, environmental benefits to active transport. But I haven’t always been a biker, until a few years ago I was completely car-dependent and had been since learning to drive at high school.

I use a bike now for getting to work and to events and as a rule, I try to ride anywhere less than 8kms (30mins) distance. Although I am an experienced rider, I had never tried an electric bike until now. The eZee Sprint 7L is heavier and more cumbersome than any of my normal bikes, and it rides like a silent motorbike. It goes FAST and the battery means it’s built for heavy loads, so stopping on the way home for groceries (known in the biking world as #quaxing after former Olympian Dick Quax sparked an argument about the topic on Twitter) is a breeze. 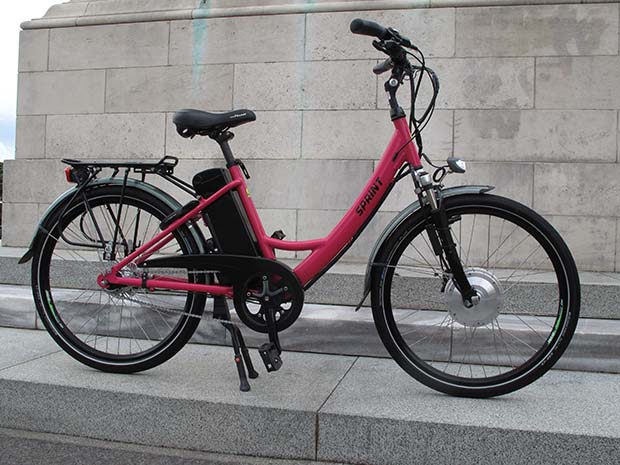 I trialled the bike for a week and monitored by trips on the e-bike using Google maps. The car-travel times were the same as it took me on the bike. Parking was never a problem as the bike has a built-in lock and can be left anywhere. I charged the battery once a day (plugged into a normal socket). I definitely recommend an e-bike to people considering downsizing from a two-car to a one-car household. For someone who’s already on the bike-riding trend, an e-bike will be a very welcome addition to the bike shed.

My wayward wheels: from mountains to the sea

Move it in Madagascar

My Wayward Feet: Walking the magenta cycle way in the heart of Auckland