A Southland photographer has repurposed her former possession-driven life to become a conscious consumer in a small eco-home.

Heidi Horton is drinking orange juice from a fancy tumbler. The tumblers, a wedding gift, were once saved for special occasions. Now, in the downsized small-footprint Southland cottage she shares with husband Matt, there’s no room for a second set of glasses. As a result, life tastes a little bit special every day.

The hierarchy of everyday objects at the couple’s Riversdale home was disrupted when they built it last year. The 65-square-metre building, called Devon Cottage, is technically too large to be a tiny house (most definitions say they should be 35sqm or less). Still, it is much smaller than the national average of 149sqm and practically minuscule compared with the average size of homes built after 2005, which is 205sqm.

It’s also tiny compared with their previous turnkey home, which they constructed in 2012. That house had four bedrooms, two bathrooms and two living areas. “We built it just after we got married. We were planning on having kids and thought a big house was a prerequisite,” says Heidi, who specializes in wedding photography. “We tried for three to four years to have children and spent a lot of time at medical appointments. We were so unhappy. But when we stepped back and thought about it, we realized having children wasn’t something we had to do. We had unconsciously gone down that road because it’s almost expected to be the next stage.”

When they started looking at life without children and reconsidered their goals, they saw that materialism drove much of their decision-making. “We felt that friends and family were busy ticking off their life achievements and we had to keep up. But we’d become excessive — we had two spare rooms filled with junk, and we didn’t use more than a third of our house.” 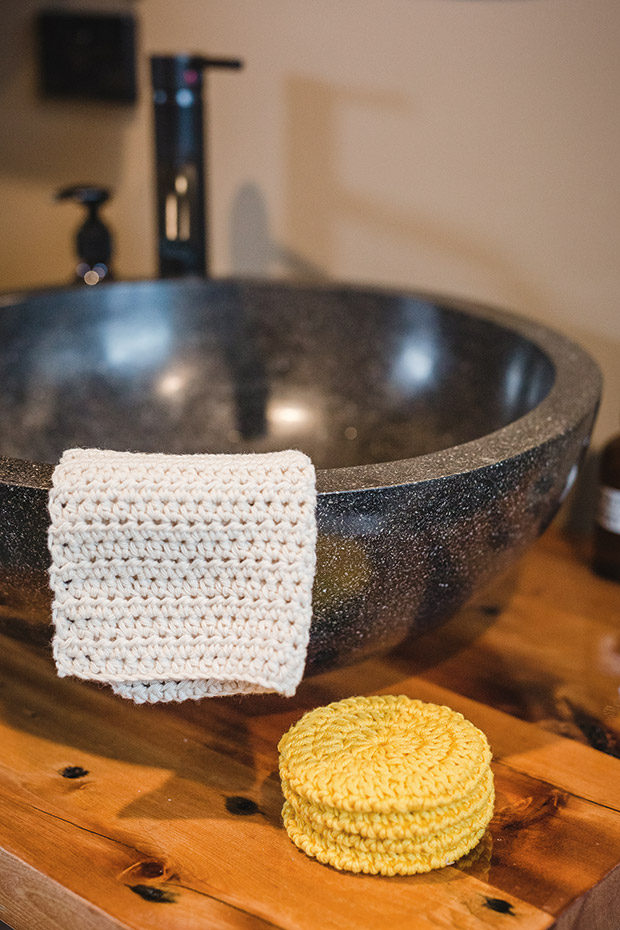 It was a relief to sell up and downsize but it was a massive undertaking, says Heidi. After a successful garage sale, two truckloads of clothes, books and household items were donated to the local op shop. Even so, 900 kilogrammes of unsalvageable items went to the landfill.

“That broke my heart. I’d spent my hard-earned money following trends and buying stuff. In the end, it was just junk and filled up a hole in the earth.”

Her new minimized life isn’t about doing without. It’s about rethinking what’s needed. Did they need 15 big fluffy towels? No. A single-bed sheet when they didn’t own a single bed? Absolutely not. Would they ever find a use for three sets of dinnerware? Never. 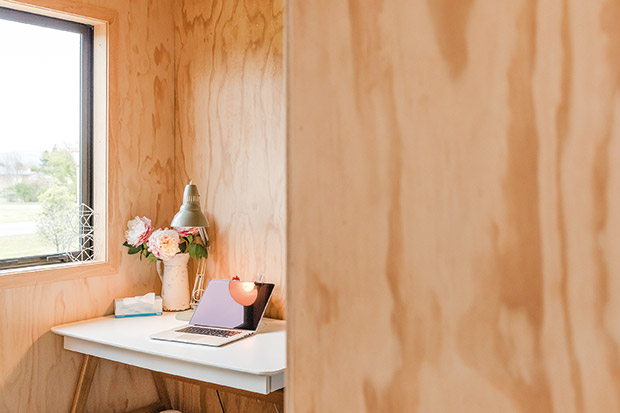 Possessions are more than replaced with experiences; walking her bichon frise-cross, Henry, time spent enjoying friends and family, and trying to build in “nature time” during her work as a wedding photographer. Such things now give Heidi the most pleasure.

Marie Kondo, the author of The Life-Changing Magic of Tidying Up and Francine Jay, author of The Joy of Less, may have helped with the practicalities of downsizing. But much of Heidi’s inspiration comes from her late father George, who grew up during the Great Depression and was thrifty and resourceful throughout his life. 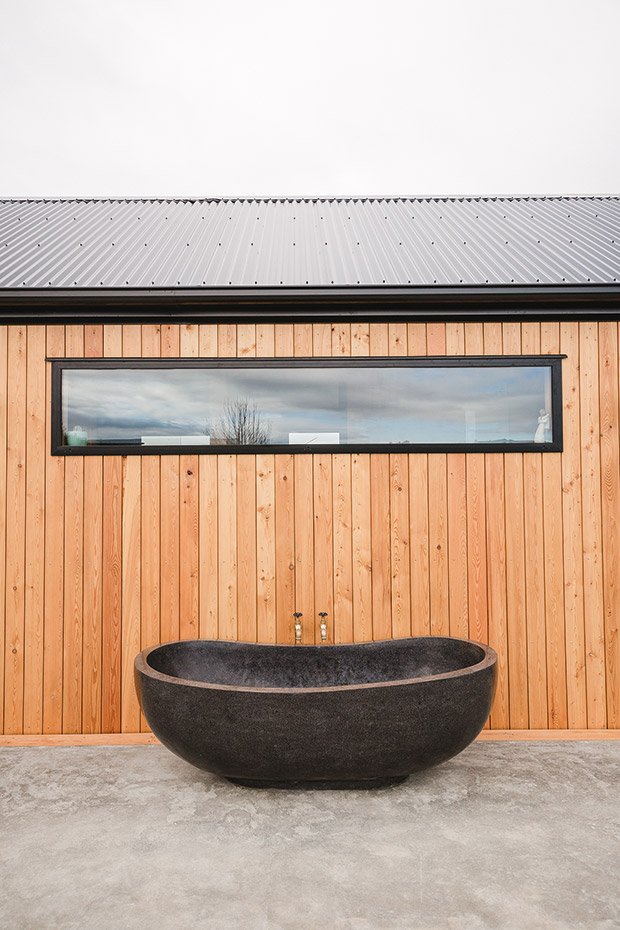 A retired schoolteacher, he was also a lot older than the fathers of her peers (she was the daughter of his second marriage), and as a teen, she cringed at his homespun outlook. Now she wishes she could ask his advice on how to control aphids in the garden.

Well it’s been a productive week in the garden. Today we got the strawberry cage in place. I planted out seedlings in the tunnelhouse that I sowed during lockdown, got a propagating bench in & @matthorton14 created a handy sink setup so I can clean & cut veggies etc outside. A few more finishing details to be added to that including recycling the water back to the garden. A full proper garden tour to come soon! (One day when I actually finish gardening before the sun goes down!) #smallhousebiggarden #gardenplanning #smallhouselife #cottagelife #livingwithless #tinyhouselife #gardendesign #homeandgarden #selfsufficiencygoals #cottagegarden #gardening #permaculture #growyourownfood #homegarden #vegetablegarden #homesteading #regenerative #sustainableliving #regenerativeg #grownfromseed #permaculturelife #kitchengarden

“My dad felt we’d become a throwaway culture. He was so resourceful. He had a massive veggie patch and was always tinkering away. I wish I’d tried harder to learn some of his skills.

More stories you might like:
DIY: How to make natural dyes from vegetables, fruit and pantry items

“When he was young, his family couldn’t afford to buy him new socks. Eventually, his socks would have more darning in them than original sock. These days, socks are so disposable they’re available in the supermarket.” There will be no New World socks for Heidi; one of her goals this year is to improve her mending skills. She’s learnt crochet from her very patient mother-in-law. Her first project, a cotton crochet dishcloth, is still going strong after two years.

“I love to crochet. I find it relaxing. I think we can help the planet by learning some of these forgotten skills from older generations.”

Heidi and Matt designed the basic layout of their home, a rectangular house connected with a narrow hallway, and refined the plans with Invercargill firm MAS Architecture. The foundations and frame were constructed by builders, with Heidi and Matt helping by doing most of the interiors and cladding. 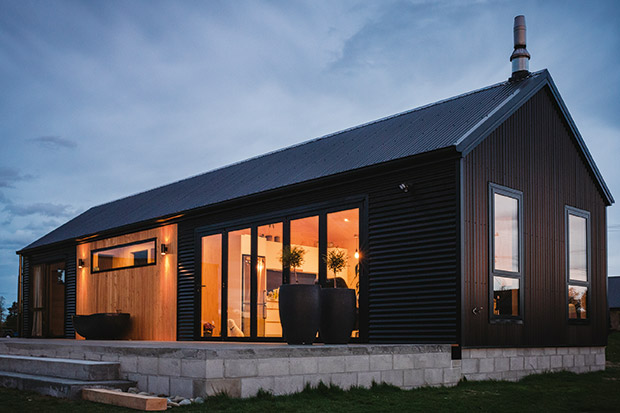 The house’s environmentally friendly features include:
* Low-E double glazing, mostly north-facing for maximum solar gain.
* An ultra-low-emission Pyroclassic wood burner.
* An insulated concrete floor, which absorbs the sun during the day and releases stored heat through the night
* The house is built with Ecoply Barrier, prefabricated structural plywood that provides a moisture-resistant barrier, eliminating the need for building wrap.

In the next 12 months:
* The couple plans to harvest rainwater for the vegetable garden (still in the landscaping stage).
* They also aim to add solar.

I’ve spent some of my morning enjoying the sunshine in my garden – planting out some silverbeet and more lettuce seedlings, checking on my beetroot, bok choi and putting some strawberry runners in the ground. PS: how good is this makeshift hot house for my wee plants?! We knocked this up with leftover building materials, some netting and clear plastic otherwise destined for recycling. I can’t wait for a tunnelhouse but until then this is doing the trick nicely, along with some fizz bottles cut in half over some other plants in the veggie garden. #myhappyplace #smallhousebiggarden #gardenplanning #smallhouselife #cottagelife #livingwithless #tinyhouselife #gardendesign #homeandgarden #selfsufficiencygoals #cottagegarden #gardening #growyourownfood #homegarden #vegetablegarden #homesteading #sustainableliving #grownfromseed #kitchengarden #wintergarden

More stories you might like:
Water Cooler: homemade drip irrigation, the best cheese roll, how to make steamed bao buns, The Moon and the Room review and identifying stars

Read more stories like these in our latest special edition, Sustainability Through the Seasons, a practical guide to living a greener and more environmentally friendly life 365 days of the year.