Why your chicken is losing feathers 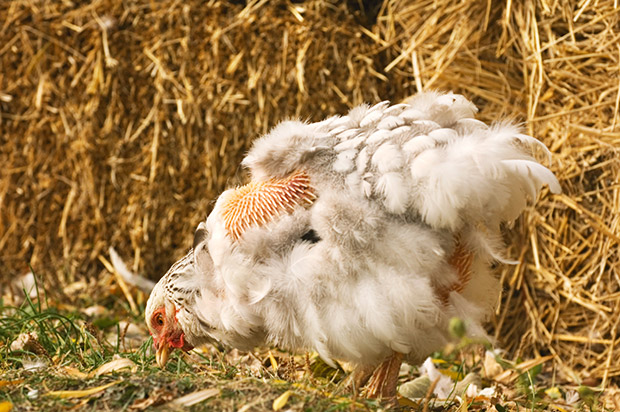 Feather loss is normally quite natural in poultry, but it can also be a sign of a serious health issue.

It’s a neck only a mother could love. Meet the Transylvanian naked neck, also known as the ‘Turken’ for its turkey-like, featherless, bright red neck. The lack of feathers means these birds are naturally more heat-resistant so they can continue producing eggs and meat, even in very hot countries. 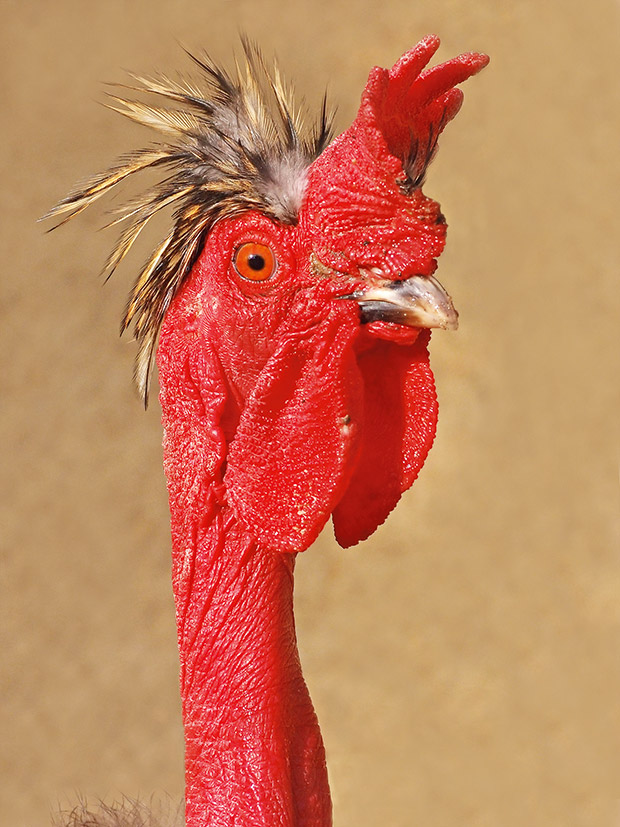 The bright red, featherless skin on the Transylvanian naked neck chicken is a natural feature of the breed. Nb: this kind of bird is not in NZ.

This featherless feature is due to a random genetic mutation. Scientists now know its caused by overproduction of a feather-blocking molecule called BMP12. The neck is most commonly affected because its skin naturally produces more of an acid that enhances the effects of BMP12.

Most NZ poultry owners get upset if they see patches of featherless skin on their chickens, especially if the bare skin turns bright red. As with the Transylvanian naked neck, the redness is the skin’s natural reaction to sunlight, not a sign it is burnt or diseased. 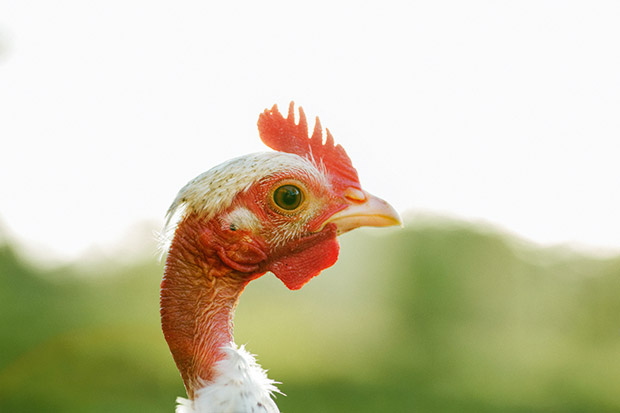 The lack of feathers helps the ‘naked neck’ breed to cope with hot temperatures.

In all other poultry breeds, a large feather loss is most commonly due to moulting. This is a natural, annual process all birds go through. The better a hen’s egg production, often the more dramatic her feather loss. Sometimes it can happen over a day or so.

Alternatively moulting happens in patches. This is most commonly seen on the centre of the back, and around the head, neck, tail, and bottom.

This first set of adult feathers will last for up to 12 months. Over a year, feathers become brittle. They are easily broken through wear and tear, and brushing up against their coop, nests, and other objects. By the end of the 12 months, birds can look pretty scruffy. 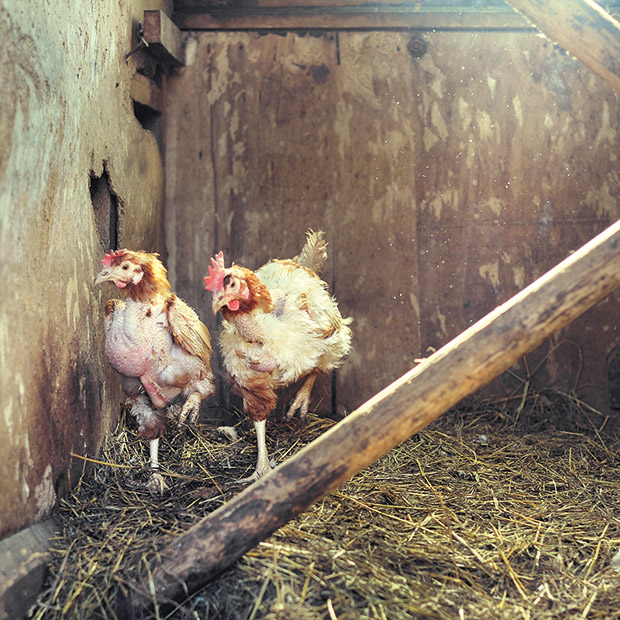 A good egg-producing hen will keep laying, but gradually lose feathers until it’s time to moult. Moulting is brought on by hormonal changes, affected by:

If your hen/s moult a huge amount of feathers in a short time – it will look like a pillow fight has gone on in your coop – it’s a sign of a good layer. Hens that aren’t such good layers may lose feathers slowly, looking slightly scruffy but not naked. They may not lay eggs for weeks, possibly months longer than a good layer. 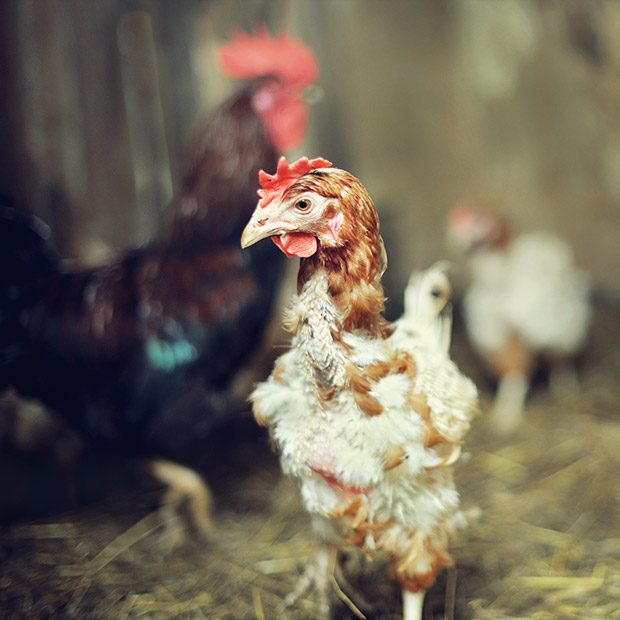 An ex-commercial hen, missing many of her feathers due to moulting. A dramatic loss of feathers is a sign she is a good layer.

Replacing a set of feathers is a big ask for poultry, especially hens. Their bodies use an enormous amount of protein to regrow feathers – feathers are 85 percent protein. At the same time, hens also replenish large amounts of calcium in their bones, which they’ll use in the production of eggshells over the next year.

It’s important to have a good quality, high-protein feed available through autumn and winter. Don’t restrict it, thinking it’s a saving because your hens aren’t laying, as birds will struggle to regrow feathers and won’t be as productive in the coming year. You can supplement their diet with extra protein such as pet mince or a sprinkle of meat meal over their feed.

An insulated coop, especially the roof, helps to conserve their body heat when it’s cold and allows them to put more energy into growing feathers, rather than using it to keep warm. Poultry has quite thin, fragile skin under their feathers. When exposed to air and light, it thickens and becomes redder as pigments rise to the skin’s surface to protect it, similar to tanning in human skin.

This redness isn’t sore or sunburnt. The longer the skin is uncovered, the thicker and redder it can become. It’s the same as you see in turkeys, and the Transylvanian naked neck.

6 other reasons for feather loss

A full, naturally-occurring moult takes place in autumn, as hormones respond to the lowering hours of daylight. But sometimes a stressful situation can induce a moult or a partial moult, especially around the neck. You might notice the ‘cape’ of feathers on the neck thinning, or the presence of new ‘pin’ feathers in the neck area.

A hen subjected to a mild stress in late spring, when in full production, may suffer a drop in egg numbers and moult around the neck. The same stress to a bird in autumn can cause her to cease laying and moult.

1. Feather loss on the neck 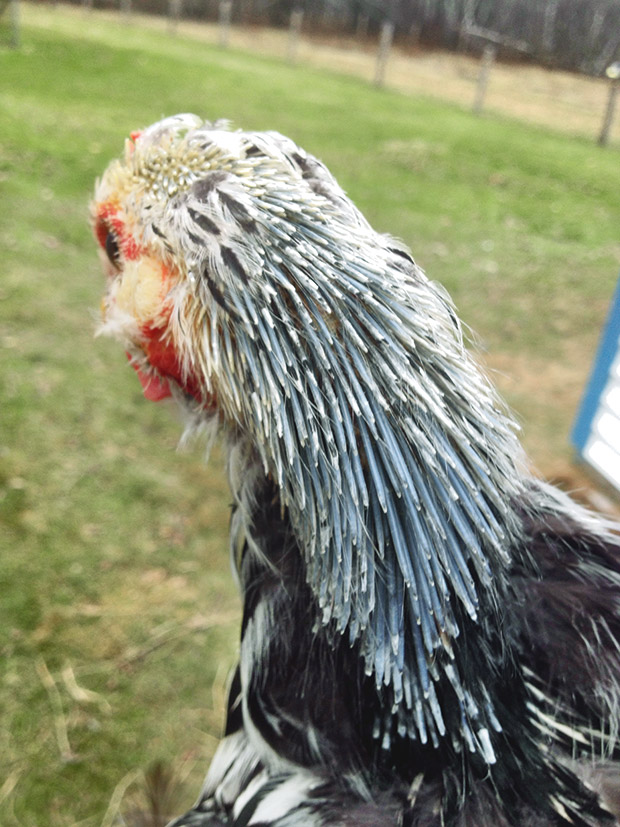 New feathers growing out of the neck.

A loss of feathers at the front of the neck is often caused by rubbing on the feeder lip. It will be most noticeable on birds which have come from a commercial farm where there may be a high raised lip on the edge of a feed trough. Hens may wear off feathers by continually poking their heads through netting to get at feed on the other side.

2. Feather loss on the back or back of the neck

A bare back on normally well-feathered hen is usually a sign of treading or over mating by a keen rooster. The feathers may appear dirty, and his claws might rip the skin. Either remove the hen until she heals, or you can buy or make ‘hen saddles’ or vests to protect the area. 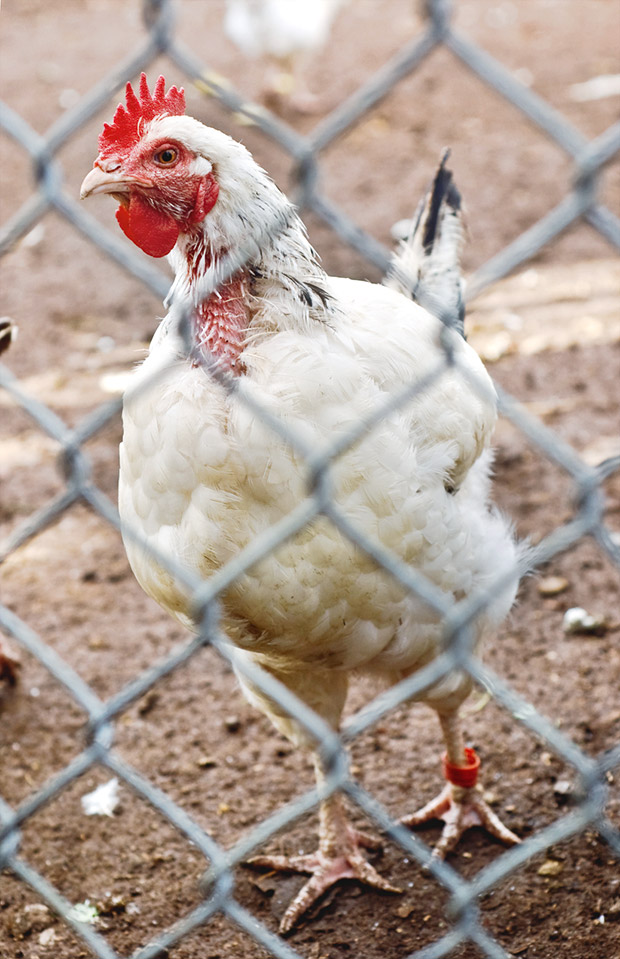 Feather loss due to a hen rubbing her neck on netting.

3. Feather loss around the tail/vent

An exposed tail area, birds eating loose feathers, or deliberately pecking them out, are signs of feather pecking. It can rapidly lead to cannibalism. The first sign may be a dead hen with blood around the tail and vent area. It’s most common among young chicks and growing birds. In most cases, the reasons will be due to one or more factors, including:

More stories you might like:
Why colostrum shouldn't go to waste (and how you can benefit from it)

■ overcrowding;
■ bright light;
■ too hot;
■ lack of space for low pecking order birds to get away from bullies;
■ a mix of young chicks and more mature growers;
■ too many roosters;
■ nutrient deficiency;
■ lack of feed;
■ incorrect feed;
■ lack of feeding space for birds to eat all at once, especially if the daily feed allowance is rationed into mealtimes;
■ boredom.

Poultry require specific, essential amino acids, especially methionine and lysine. These are only found naturally in sufficient quantities in animal-based protein sources such as meat, fish, cheese, and insects.

Poultry feed made using vegetable-based protein such as soya, legumes, seeds, and grains must be supplemented with synthetically-made methionine and lysine. Some organic, vegetable-based poultry feeds can be deficient in these amino acids. Organic manufacturers are limited in how much artificially-made amino acids they can add and still maintain their organic certification.

You can unknowingly deprive poultry of these essential amino acids if their diet is limited to something such as:
■ whole or crushed grains;
■ limited free range;
■ low quantities of commercial feed, eg 75g or less per adult bird.

The symptoms of a dietary deficiency can include:
■ feather pecking, especially in the tail area or around the preen gland (on the back, just in front of the tail);
■ voracious feather eating;
■ nervousness, flighty behaviour;
■ evasive darting around.

Once feathers are pecked out, there may be a bloody hole, and other birds may peck at it, attracted by the taste of blood, causing severe injury
or death of the affected bird.

Picking of the un-feathered areas in fluffy chicks is usually a sign of an overly bright light, a brooder that is too hot, or overcrowding. It’s best to brood chicks under an infra-red heat lamp, ceramic, bulb-like heat emitter, or a heat plate which provide the right temperature, but not light.

When chicks are raised under a normal light bulb, left on 24 hours a day, pecking usually starts around the preen gland.
It can quickly progress to inquisitive pecking by many chicks, causing death.

5. Feather loss due to disease

A loss of feathers around the head can be due to parasites such as:

Scaly leg mites: These mites usually affect the legs but can also burrow into the skin around the head and face. It can be controlled by the same treatments used on the legs:

■ a covering with a thick layer of petroleum jelly or oil (reapplied daily for up to 10 days), and;
■ a topical treatment of ivermectin (0.1ml per kg of bird, applied to the skin, off-label, talk to your vet).

Nb: Beware ringworm can be passed onto humans. Source: www.poultrydvm.com/condition/ringworm

A bare bottom or lower abdomen may be due to a form of gut enteritis (inflammation of the gut) or a renal (kidney) infection caused by a disease. Both cause excess urates, the white part of the faeces. This diarrhoea stains and softens the feathers as it’s quite acidic, causing them to break off.

If the bird recovers, the affected skin may remain bald and go bright red from sun exposure or acid burns caused by faeces. The feathers will be replaced, and the skin will improve when the bird goes through a moult.

WHY BIRDS MAY MOULT AT THE WRONG TIME OF YEAR 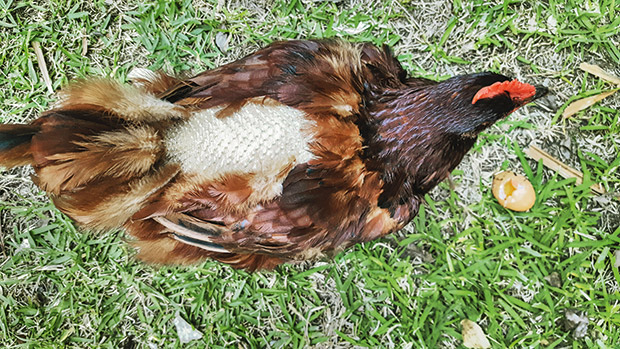 A bare patch caused by a rooster during mating.

HOW TO CARE FOR NAKED RESCUE HENS

Hens sourced from commercial farms will have been laying for at least 12 months and may be quite bare when rehomed. If they were kept in sheds or barns, they will have spent their lives at a constant, comfortable temperature, with no variation in day length and won’t have had the hormonal triggers that signal it’s time to moult. 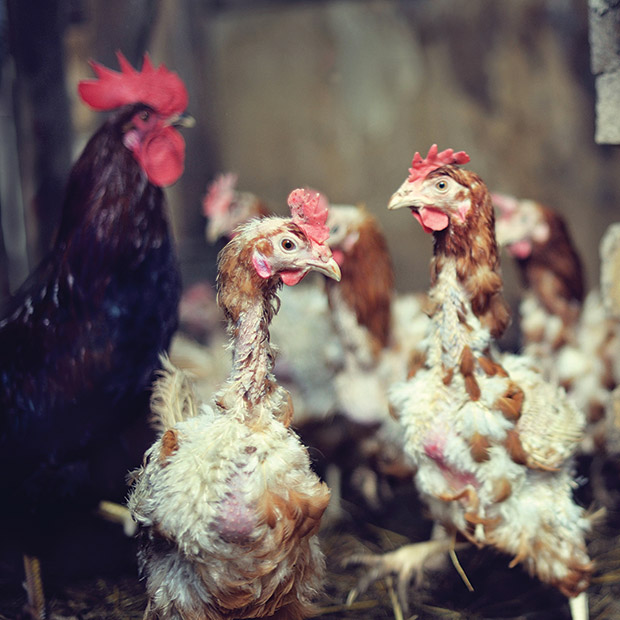 Rescue hens will need extra care to help them cope with the big change in temperature.

The feather loss you’ll see when they are first rescued is from the wear and tear of living in a commercial environment. When rescued, these hens will need extra care to help them cope with the sudden change in environment, feed, lower temperatures, and shorter day length. They’ll usually stop laying quite quickly, moult any feathers they have left, then start re-feathering.

5 reasons your chicken may be limping

6 home remedies for a sick chicken: Reduce swelling with honey, use molasses as a laxative, acidify the crop with white vinegar