How a small Waikato farm harnesses the power of Paulownia, the fastest-growing tree in the world 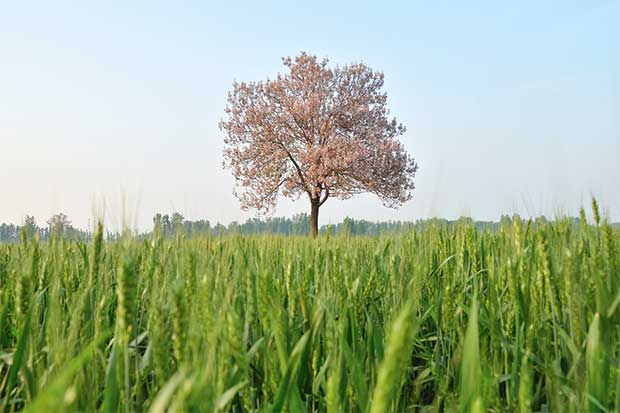 A business advisor once told me that I couldn’t run two businesses simultaneously. One, he said, would always suffer while I concentrated on the other. Time and experience has shown there is truth to this statement.

There are never enough hours in the day, and sometimes you are juggling jobs. Organisation, prioritising and scheduling are important.

Graham Smith is an exception. He believes success on a small block requires diversity. His optimism has held true for 30+ years, and he and wife Tess have many successful businesses to prove it. 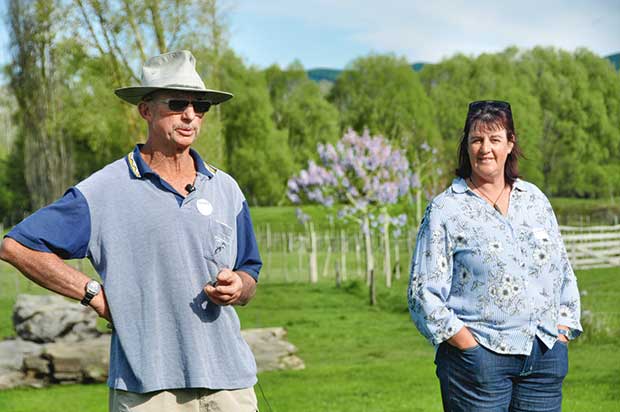 Home is a dairy farm. But milking a small herd of just 78 cows didn’t tick the bank’s boxes, back when they started in 1988. You can’t, the bank said, make a living from such a small herd.

The land is contoured. There is 10ha (25 acres) of flats, but the rest is either steep, with cliffs in places, or damp and swampy. The Mangatutu Stream runs through it. You can’t, the bank said, make a dairy farm out of land like that.

Thirty years later, Graham and Tess are still milking their small dairy herd, making a living from their farm, and enjoying the sheer majesty of their volcanic rock (ignimbrite) cliffs and clear stony-based stream. 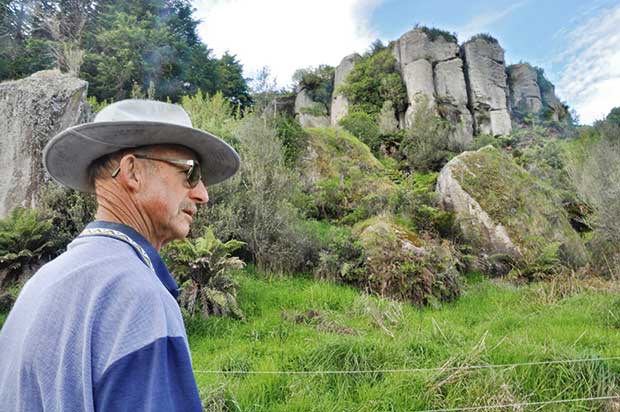 Graham loves the unique geographic features on the farm, including cliffs of volcanic rock from the Taupo eruptions.

These two farm features pay their way. The cliffs provide a training ground for industry abseilers to practice and hone their search and rescue skills. The stream is the second-clearest in the Waikato (Graham believes that’s helped by their long history of riparian planting) and home to thousands of trout. Fishermen pay to catch and release them.

The couple also host visitors. There’s a home-made composting toilet, to go with the former Waikeria Prison cells which are now renovated and used as accommodation. The locks have been removed but don’t try to scarper out the back windows – they’re unbreakable. Each cell sleeps four, and they also offer a homestay in the house. Turkeys roam wild and are harvested for meat.

Tess runs Great Garden Workz, a garden maintenance service, throughout the Waikato. Graham is so busy running their other businesses on the farm, he has a worker to help him with the dairy herd.

“Trees have taken over my life.” 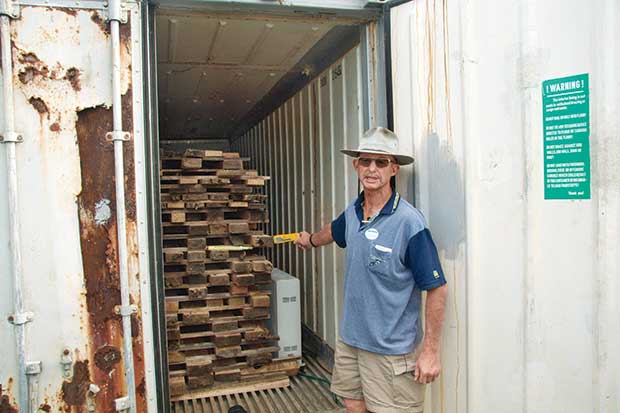 Most of them are paulownias. You may know them as a stunning ornamental tree that bursts into a canopy of purple in spring. But their function on Miraka (Māori for ‘milk’) farm is multi-purpose. Graham is passionate about the quality of the wood and benefits of what is a valuable timber tree. He propagates them, grows them amongst his cattle, mills, dries and sells the timber.

There are seven species of Paulownia. Graham’s focus is on Paulownia elongata, renowned as the fastest-growing hardwood tree in the world. He can get them up to six metres tall in their first year. Ten years later, he coppices them to mill the timber. 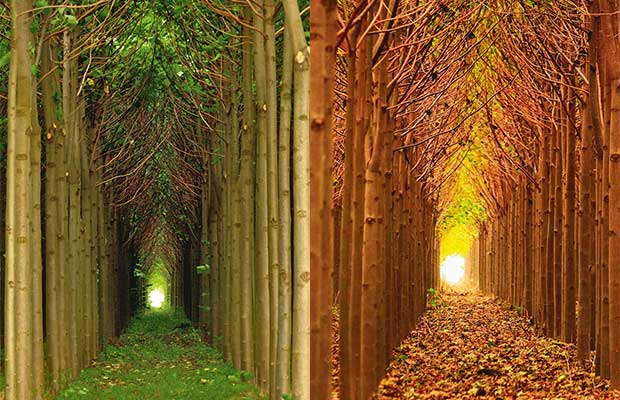 This image and right: a paulownia plantation in Bulgaria, showing even when planted close together, grass still thrives.

Paulownia trees take a lot of work to manage. They require pruning twice a year to establish a clear timber trunk. They need particular growing conditions, and don’t like wet feet or strong winds. Get them in the right spot and they can grow so fast, they have been classified as an invasive species in some US states.

The quick growth produces a wood that is strong, but extremely light, weighing 250-330kg per cubic metre. Graham claims that makes it the second-lightest timber in the world (balsa being the lightest at 170kg/m3) with one of the strongest strength-to-weight ratios.

THE BONUS FOR FARMERS

However, paulownias produce a lot more than just timber. Each tree grows leaves equalling 100kg of dry matter per year. Even with 100 trees planted per hectare, there is no reduction in the grass growth underneath, and you can take advantage of all that extra feed growing up above.

Cows love the leaves as they drop in autumn; the Chinese dry them to make hay. Graham also prunes in summer and feeds the branches fresh. The cows love it so much, each tree is protected by an electric fence. Given the chance, cows will ring-bark a mature tree and kill it. 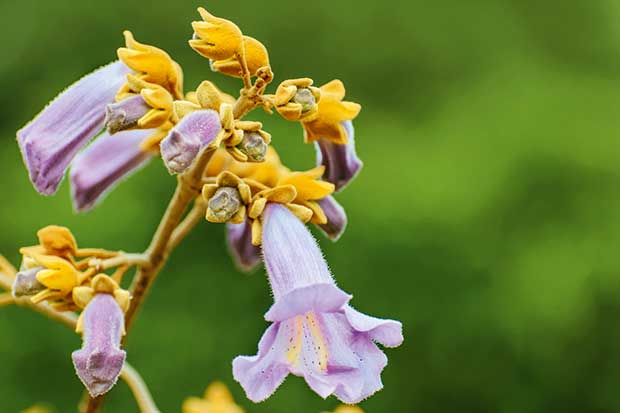 The flower on a paulownia tree.

The purple foxglove-like flowers are a food source for bees, and the shade and shelter provided by the canopy benefit Graham’s stock.

Underground, the trees are hard at work, sending roots out over 20m to capture nutrients. University of Mississippi research found paulownias reabsorb up
to 75 percent of the nitrogen and nutrients that is missed by grass roots.  Its environmental benefits are not officially recognised in NZ.

Overseer, the software used by the NZ farming industry to measure nutrients, hasn’t been programmed for paulownias, so farmers can’t officially claim their benefits.

Graham’s focus is the timber. He has been marketing and selling it since an early customer reneged on an order for boat timber. The self-titled “old dog learning new tricks” figured out how to use a computer, commissioned a website, and sales have doubled every year since. Demand is now so high he doesn’t have enough trees, so he buys and mills trees from other growers. 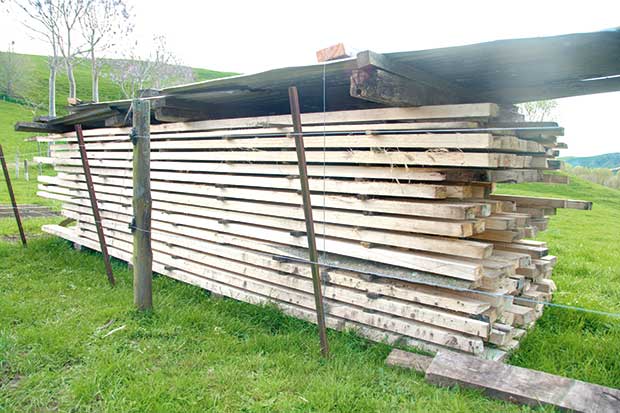 While paulownias are a big part of their business, Graham and Tess have planted more than 5000 other trees. Many help to stabilise the steeper parts of their property from erosion.

There are forestry stands of pine, gum, Mexican cypress (Cupressus lusitanica), kauri, black walnut, and riparian plantings of willows and poplars above ground.

Below ground, he is finding totara and matai buried by the eruptions of the Taupo Volcano (now covered by Lake Taupo). Finding this timber isn’t easy and retrieving it from 2.5m deep takes a lot of work. But once dried and milled, the sale of the wood can be very lucrative. 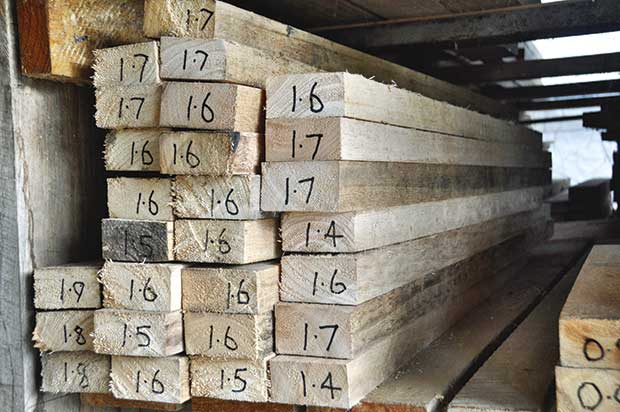 Graham mills and dries the timber himself, then sells it.

The money-making ventures don’t stop there. On my visit to Miraka, a flock of turkeys wandered over the ridge. Free-range tick control, says Graham, who culls them in winter for their breast meat.

Elsewhere, a flock of 60 or so ducks – mostly Khaki Campbells with some Indian Runners and Swedish Blues – also free range, controlling slugs and grass. They are penned at night behind the tree nursery, so the eggs can be collected and sold, yet another source of income for this busy couple.

14 things to know about paulownia wood

2. Has a hollow pith up the centre

6. Bonds well with glue and epoxy resins (versus other woods which  soak them up)

9. Resistant to insects and decay

12. Used for veneer, and even business cards

Coppicing is felling a tree down to knee height or shorter during winter dormancy so the established roots regenerate in spring.

This is an ancient way of sustainable foresting, suitable for a number of species of tree, including willow and poplar.

HOW THE CHINESE USE PAULOWNIAS

China grows extensive areas of paulownias in a ‘Forest Net’ on the plains of the Yangtze and Yellow Rivers. The 45,000ha (111,000 acres) of land is covered in a grid of single-row shelterbelts, around half of them paulownias (175,000 trees).

The forest was established in 1964 and is divided into 7ha cells. Wheat, maize, millet, sesame, soybean, tea, ash (coppiced for basketry and staves), willow (coppiced for basketry), grapes, apples and other fruit, jujube (Chinese dates), and a range of vegetables are grown within each cell. 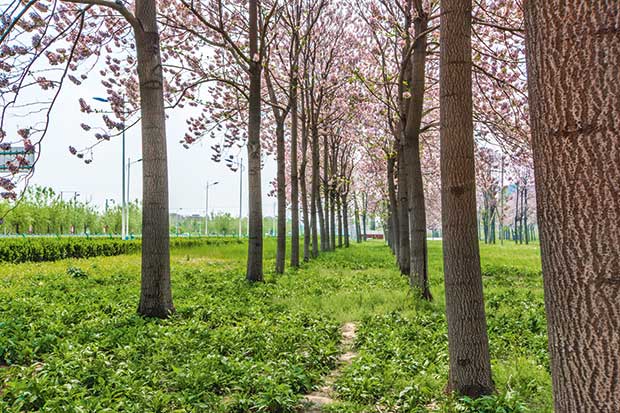 Paulownia trees in Lankao County, in the Henan Province, China.

The effect of the trees has changed the climate and production has soared. The region used to produce 1.5 tonnes of produce per hectare; now, it’s 15 tonnes. Other benefits included:

Wheat, millet and maize do better among the paulownias than crops like sesame and sweet potato. Paulownia leaves are used to feed pigs, poultry, and fish.