The Tregidga family (front row, from left to right): Mika, Kara the dog with owner Liz, Ariana, and William. (Back row): Kathryn (with daughter Mika), Owen in the arms of his mum Amy, Grandma Olive, Jenny, and Phil.

A family in its fourth generation of growing vegetables not only flourishes during the lockdown but also wins an award.

When the going gets tough on the four-hectare Tregidga farm, near Clevedon, 48 kilometres south of central Auckland, Liz Tregidga can look back as far as her great-grandfather George for inspiration.

The Tregidga name (pronounced Treh-gidge-ah) is legendary in New Zealand horticultural circles. George’s property, on which he grew seed onions for Yates Seeds, was on the corner of Captain Springs Road and Church Street, in the middle of what is now suburban Onehunga. 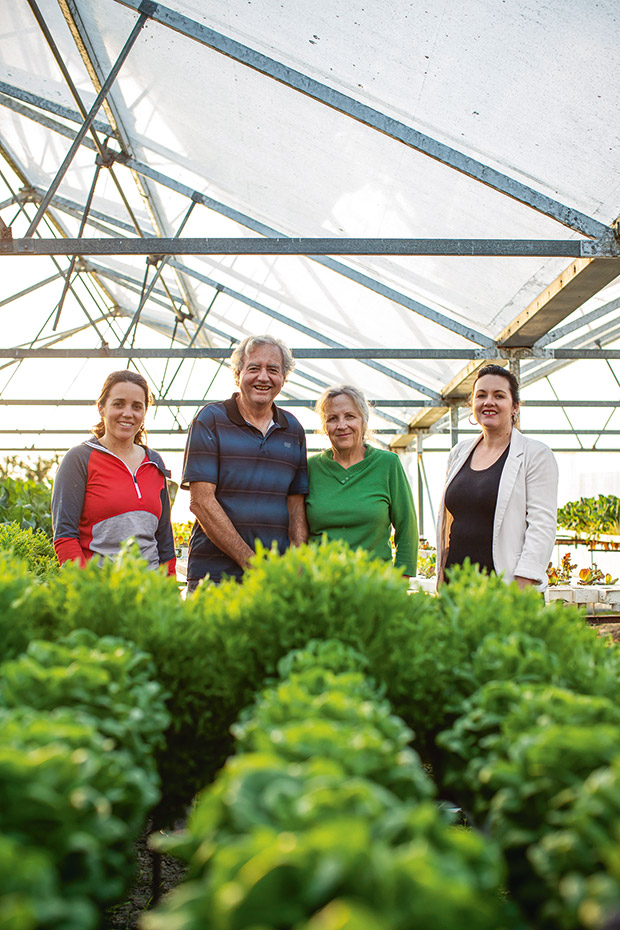 The award-winning growing team of Liz, parents Phil and Jenny, and sister Amy. Phil and Jenny still work in the business, but call Liz “The Boss”.

Relatively nearby (in terms of geography if not time), her grandfather Percy pioneered growing tomatoes in glasshouses on Māngere’s Favona Road, next door to the Woolworths New Zealand building. Her uncles, Mark and George, were the first into the large-scale hydroponic growing of tomatoes on the same Māngere farm.

Phil and Jenny, Liz’s parents, started their own hydroponic operation after deciding that Māngere was too built up for the country life they sought for their family (which eventually numbered five children). They chose land at Clevedon with relatively poor soil (irrelevant for hydroponic growing) as it met their requirements for a flat site with water. Their hydroponic-lettuce-growing operation initially supplied auction houses, later supermarkets and restaurants. And, then, in the pioneering tradition of the Tregidga family, they started producing speciality lettuces.

Iceberg lettuce’s days of dominance in the salad bowl were numbered once Jenny and Phil began importing red and fancy lettuce seed in the 1980s from the United States. Supermarkets and the high-end hospitality trade eagerly sought their buttercrunch, curly green and red-leafed varieties. The majority of crops are grown hydroponically, but root vegetables — for example, heritage carrots — grow in huge planter bags.

But when the supermarkets began demanding mixed-leaf bags of red and fancy lettuce and cut the price, it was challenging to remain profitable. By the middle of the past decade, after 30 years in the wholesale vegetable-growing business, Jenny and Phil felt they were on a hiding to nowhere and contemplated selling up.

Enter Liz, arriving home from Britain in 2016. Although she is without formal horticultural training, she is a Tregidga; the know-how is in her genes. She had grown up working alongside and learning from her parents and had been interested enough to study the industry. She also was unwilling to see the family farm and business vanish in a sale.

“Just as the banks were telling our parents they needed to sell up, Clevedon Buffalo Company owner Helen Dorresteyn (who featured in NZ Life & Leisure, March/April 2018) started the Clevedon Farmers’ Market,” says Liz. “And they decided to try that as an avenue for selling their produce.” It became apparent that to make the market stall profitable enough to compensate family members for the hours they needed to manage it, a wider range of produce – and more of it – was required. So they swung into action and increased the veggie varieties they grew, which also meant introducing new ways of producing. Into grow-bags went a dozen different vegetables and into yet more grow-bags went the same number of herb varieties.

It has become a proper family affair. Along with their parents, Liz was joined by her sister Amy, who helps with marketing, and when the recent lockdown struck, all were regularly attending three Saturday and one Sunday markets. Other siblings Kathryn (a physiotherapist), Andrew (an aircraft engineer), Andrew’s wife Mehtap (in recruitment) and David (a business analyst) all help out when career commitments and family responsibilities allow. Even the grandchildren (Phil and Jenny have five grandchildren – William, Ariana, Mika, Owen and Tara) are, in the time-honoured Tregidga tradition, often found planting, watering or potting. Ariana and Mika help out at the markets too.

Until recently, Liz, Phil and Jenny were up every weekend at 4.30am to prepare for the markets. But while the markets were useful, there was always one troubling issue: the weather. While a bit of rain doesn’t bother a Tregidga a tiny bit, customers are more fickle. They tend to lie-a-bed on rainy Saturday mornings. 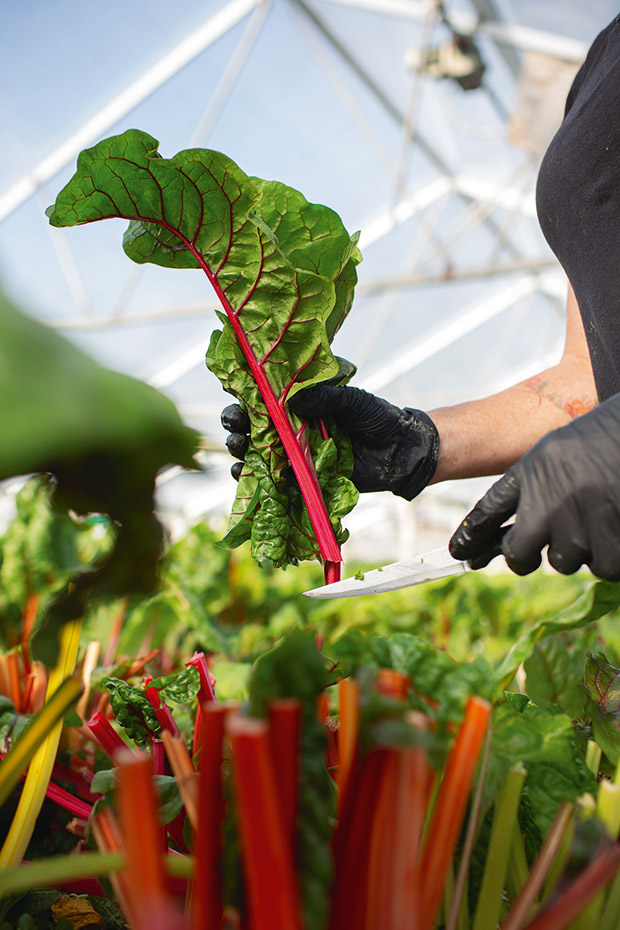 What was Liz to do with mountains of spring vegetables and glossy herbs left over when customers stayed at home? Vegetables don’t retain their looks for long.

That Tregidga ability to pivot on a rootball came to the fore, yet again. Even before the pandemic struck, Liz was thinking hard about a solution to rainy Saturdays chopping revenue in half. She had established an online portal allowing customers to shop from the rain-free comfort of their sofa. Crops are picked, washed and delivered within days of the harvest directly to the customer’s door. 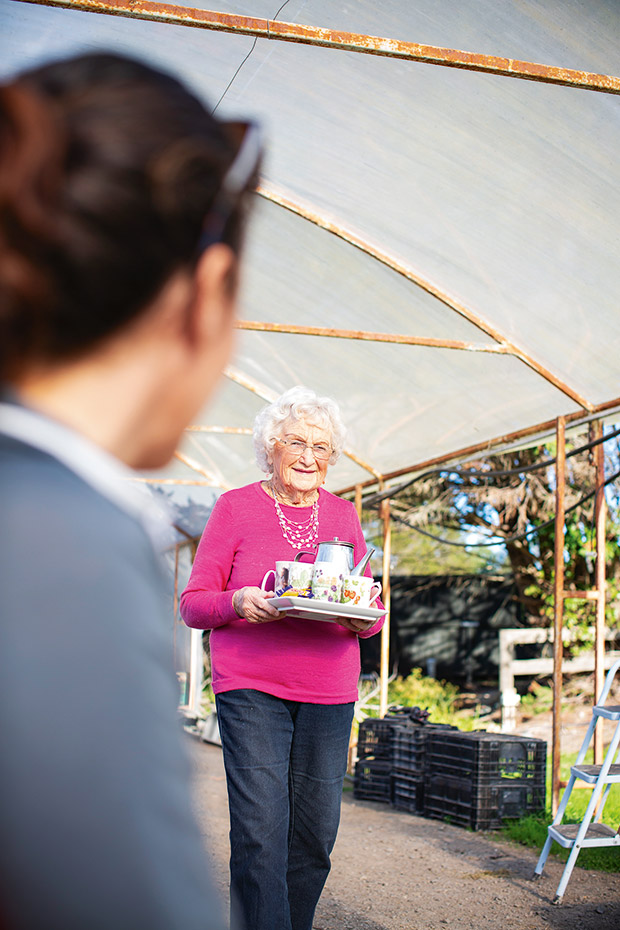 It was just such a box of Clevedon Herbs & Produce, back in early March, that wowed judges at the 2020 Outstanding NZ Food Producer Awards. The Tredgidas’ entry won a gold medal as well as the coveted NZ Life & Leisure Spirit of NZ Award, which recognizes ingenuity and sustainable principles.

Said the judges: “The basil took us to Italy. The presentation was fantastic – herbs on their own roots, carrots and beetroot with leaves still attached showing absolute freshness.” 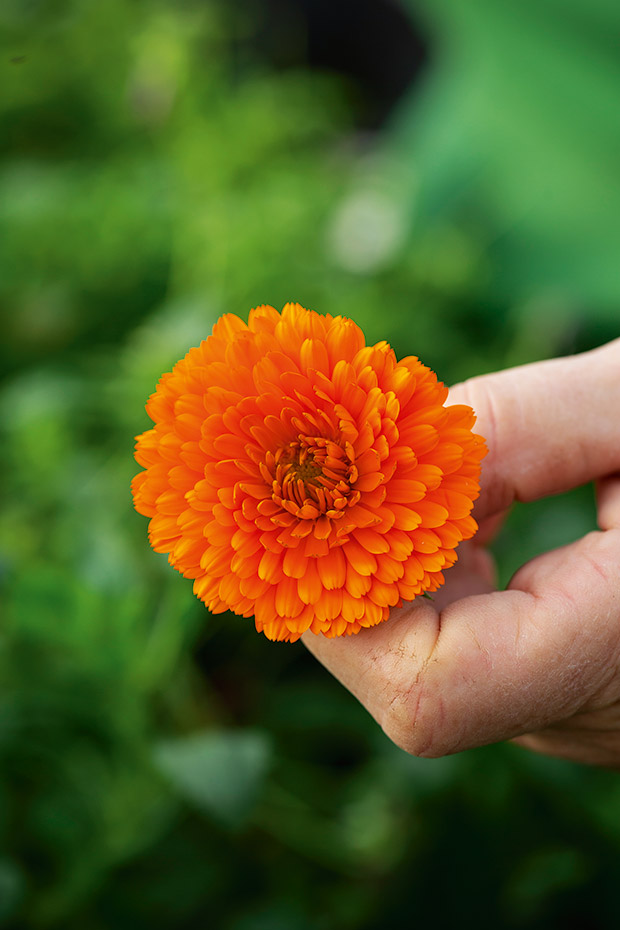 Customers get “a little box of love” from the Tregidgas, filled with edible flowers including marigolds (citrus-fruit flavour), nasturtium (peppery), carnations (sweet), and violas (because they’re pretty).

The business’ green credentials extend beyond its chemical-free vegetable-production method to the reusable-recyclable cardboard delivery box (made in Auckland by Boxrite), in which the veggies are packaged, and the Econic EcoClear bags used for the leafy greens.

The bags break down in compost within 10 to 14 days. The only other packaging is the odd rubber band around the herbs. Liz’s idea to create home-delivered boxes was such as success that it meant the family could cut back to attending just two markets. By early March, they were selling 60 to 70 boxes a week and dreamed of reaching 100. But when the country went to Level 4, things went crazy; there were 250 orders in one two-hour period. It seems the habit has stuck, and orders continue to come in thick and fast. 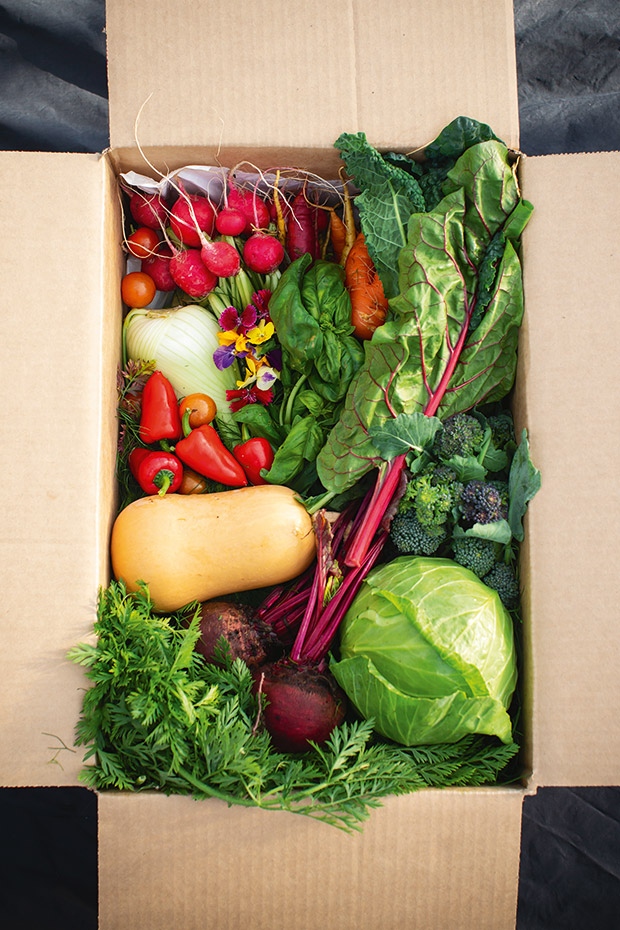 “Very few growers deliver directly to customers,” says Liz, who is now called “The Boss” by her parents. “There’s a simple secret to our family’s success,” says Jenny. “We have a great understanding of each other.”

HOW TO THRIVE IN A VIRUS STORM

The Tregidga family says being able to respond quickly to market demands was a big part of its recent success. “We had to improve our systems to cope with so many orders.” The company’s staff — Charlotte, Kate, Melanie, and Fraser — worked long days alongside Liz, Phil, and Jenny to keep up with demand.

“I don’t know how to thank them”, says Liz. “We’re so grateful. We could have employed extra people, but we wanted to keep our bubble strong. We worked 12-hour days, with instructions flying around the place, and they adapted so well.” Phil sees the home-delivered boxes as a back-to-the-future story. The couple discontinued selling to restaurants and supermarkets in the mid-2000s because it was unprofitable — so many in the supply chain took their cut.

The hospitality industry proved fickle, and supermarkets turned them, and their business, into a mere supplier number when what they really wanted to do was produce beautiful vegetables.

“With the boxes, we’re going back to how things were when my parents were young and produce was delivered to your door.” Toast the walnuts in a small pan set over medium heat, then leave to cool. Put all the dressing ingredients in a small jar. Cover and shake well until combined.

Put the rocket leaves, onion, apple, walnuts and parmesan in a salad bowl. Pour over the dressing and toss to combine. Serve immediately. Serves 4 as a side 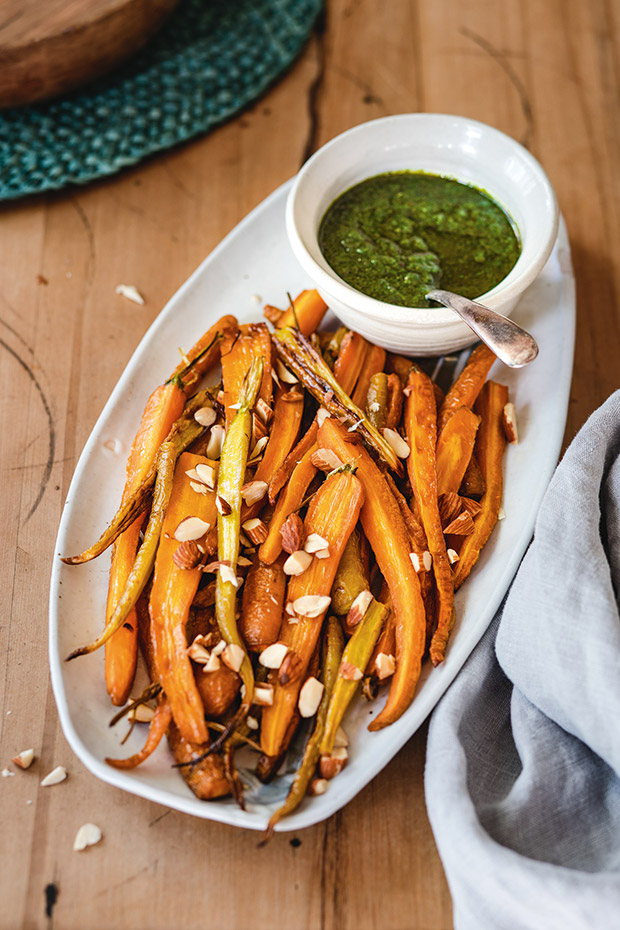 This simple salad makes use of the carrot root and tops so nothing is wasted. It is an excellent side to slow-cooked meat.

Preheat oven to 190°C. Wash the carrots, remove the green tops and set aside. Halve the carrots lengthwise and place in a roasting dish. Drizzle with olive oil, season well with salt, and toss to combine. Bake for 25 to 30 minutes until golden. Scoop onto a serving dish and cool a little. Scatter with sliced almonds before serving.

Chimichurri: Place the reserved carrot tops, herbs, garlic, paprika, chilli, salt and vinegar into a food processor and pulse. Drizzle in the olive oil while pulsing until thick, adding extra olive oil if required. Don’t over-mix the sauce as a little texture is optimal.

Add extra vinegar or salt if needed. Serve in a bowl alongside the roasted carrots. Leftover sauce can be stored in the fridge. Serves 4 as a side