A layer of dark chocolate icing gives this moist feijoa cake a touch of indulgence.

This recipe never fails, and makes a rich, moist cake. It’s also one of the easier feijoa cake recipes I have found. There’s no need to cream the butter and sugar or add eggs one-by-one as you do with most recipes.

The chocolate butter icing can be kept in the fridge for a few days. Bring to room temperature and beat again until smooth before icing your cake.

If you want a plain feijoa cake, leave out the cocoa, and dust the finished cake with icing sugar.

Mix the feijoas, walnuts, sultanas (or goji berries) and sugar in a large bowl.

Beat the egg and melted butter together in a small bowl, then stir into the fruit and sugar mixture.

Add the flour, baking powder, spices and cocoa powder. Stir lightly until just combined. Do not overwork the mixture.

Pour the batter into the tin and bake for 45 minutes or until a skewer comes out clean. Cool in the tin before turning out onto a cake rack. Leave to cool completely.

To make the icing, melt the chocolate in a bowl set over a pot of simmering water. Do not allow the base of the bowl to touch the surface of the water. Once melted, remove and allow to cool until the chocolate no longer feels hot to the touch.

Beat the butter in a bowl until soft, then gradually beat in the icing sugar. Fold in the melted chocolate until completely incorporated. If the mix is a little stiff, add a few drops of milk.

Spread evenly over the top of the cake. Decorate with edible flowers, broken pieces of walnuts and goji berries. 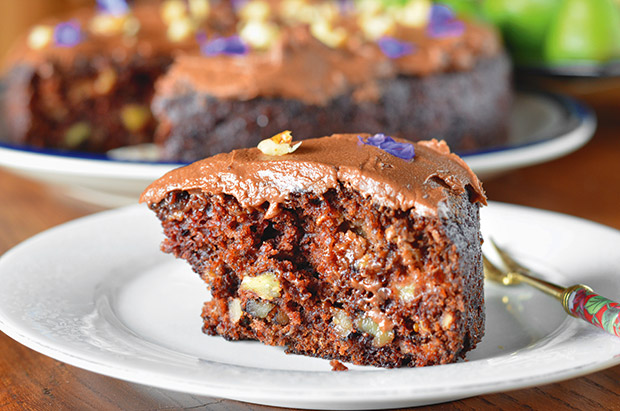