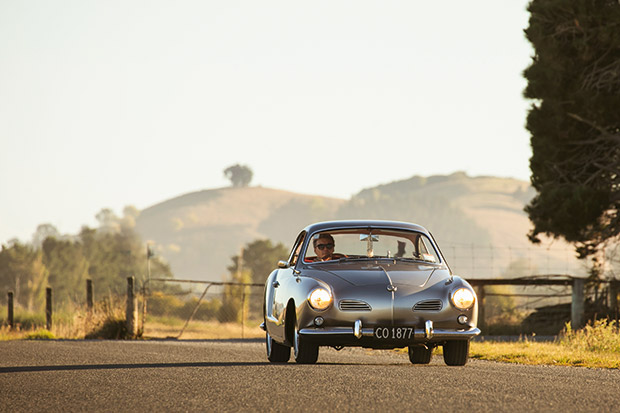 Ben Foster has come to realize his car project is a form of therapy for himself and his mates after the psychological and mental anguish of the 2016 Kaikōura earthquake and the last year of the pandemic.

When sculptor Ben Foster upended his newly purchased collection of boxes containing what was supposed to be the components of a Volkswagen Karmann Ghia onto his workshop floor, he had no idea what he was looking at. It was an absolute mystery. And what a mystery it was; a riddle, as the saying goes, wrapped in a mystery, inside an enigma.

The boxes were supposed to contain a complete inventory, but important bits were missing — such as the front seats — and other parts were replicated. Ben was now the disconcerted owner of two steering wheels and six handbrakes.

But the seemingly indecipherable tangle of parts did not signify the end before Ben had even got started. It was not even the beginning of the end. But it was, perhaps, the end of the beginning because Ben was the next, and he hoped final, owner of the vehicle.

He had seen a few VW Karmann Ghias around, thought they were some of the nicest cars he had ever seen and believed they were a Porsche variant by their shape. He kept an idle watching brief on sites such as Trade Me, and then one day, there it was: for sale in Blenheim, just “up the road” from Ben’s Kaikōura home. Ben’s restoration project turned out to be a three-and-a-half-year challenge, longer than he ever imagined. Most of the work was fairly easy — thanks to YouTube tutorials uploaded by restorers from around the world — but other bits never entirely went to plan, mostly because a part was incorrect, misfitted or just plain missing.

That it was in parts was a bonus because even though Ben knew nothing about cars, one of his other objectives in life was to demystify what he saw as the dark art of building one. And here was an opportunity to make a vehicle from the tyres up.

More stories you might like:
Why every day is an open house for Cecilia and Megan Mickelsen, owners of Fe29 Gallery

Now in his early 40s, he finally had the time and money for the challenge of putting this vehicular jigsaw back together again. Not only that, but it seemed Kaikōura has more than its fair share of car restorers and collectors, and it didn’t take him long to find a team of supporters and advisors.

Many weekends thereafter, Ben would put on a beer and a few nibbles and a squad of enthusiasts would gather in his workshop to supervise, offer advice and, for crucial components, such as the clutch and axle, be hands-on as there are some things an amateur mechanic is loath to do.

He spent nights trawling through the internet, sourcing pieces from the United States and Britain in a determined effort to unite his own little state of affairs. Each purchase was followed by days of low-level anxiety, hoping the item that arrived was really the right piece. And when a part came, he sometimes had to weld together a new tool — courtesy of YouTube — to successfully fit it. 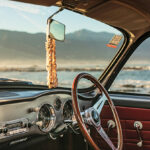 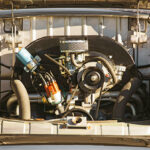 But it wasn’t all clicking on the “purchase” button from the comfort of home. He traveled across the Tasman to buy original seats from a German family who lived deep in the Australian bush.

And while on business in Zurich, he stumbled by absolute chance across an original Blaupunkt radio at a VW swap meet. Not only did he score the radio, but also an invitation to drinks around a campfire in a small neighbouring village.

In a way, Ben’s physical travel and his credit card’s electronic travel reflected the Karmann Ghia’s own journey. It first sparked its plugs in Singapore in 1961 before being imported into Auckland in 1963.

From there, the accompanying paperwork stated the Karmann Ghia was shuffled between various Auckland and Wellington suburbs before then — via Tokoroa — rolling, in one state or another, into the Garden City, where it spent most of the rest of its time before settling in Blenheim. Sometime in the 1980s, it had become a project car, and Ben has countless pages of handwritten receipts showing that up to five would-be southern restorers had put a lot of time and money into the vehicle, although it seemed it had been in parts for almost 40 years. And now it sat with Ben in Kaikōura, and he was determined it had found its final garage.

And then, at last, it was finished and at the same time maybe not nearly finished at all, as the Christchurch certifier Ben trailered the car to was dismissive of the restoration, telling Ben his attempts were, at best, average.

Although a previous inspector had told Ben that the chassis was 100 per cent, this second certifier said there was much wrong with it and that the body would have to come off, be dismantled and rebuilt. Not only that, but while the car was in the certifier’s care, it was left ungaraged in a storm.

When Ben retrieved his precious vehicle, it was full of water and sprayed with mud, begun showing signs of surface rust, and its sides had been pitted by metal filings thrown against the paintwork from other workshop jobs being conducted too closely. Ben was disconsolate. He thought this would be his forever car, but perhaps he was only going to be just one more link in the restoration chain.

More stories you might like:
Behind the Women’s Native Tree Project Trust: How this group is helping recloak Gisborne with eco-sourced native trees 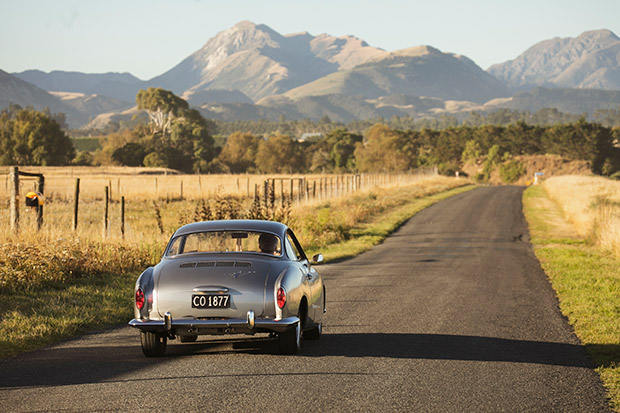 However, his local support team said he couldn’t give up, one going so far as to offer to buy the vehicle for safekeeping and sell it back to Ben when he got over his gut-wrenching disappointment and believed in himself again.

And his support crew was right — it turned out that what the so-called expert was mainly basing his dismissive opinion on was a heating channel, which was not structural at all. Another certifier in Nelson quite quickly and surely pointed this out and reassured Ben that his work on the car was a better example than most. And at last, his prize was certified and warranted and retains its original black plates.

Other restorers warned him that the elation of finally getting behind the wheel of such a project could quickly turn to crushing disappointment. But Ben was ecstatic to find the experience all he’d dreamed it would be.

Cruising into town for coffee and other chores reminds him of the simple joy of getting out and about. He refers to the vehicle as his time machine, slowing down time and simply enjoying the journey. It turns heads and starts conversations. The result is so satisfying; he thinks he might do it again. Perhaps this time a Kombi?